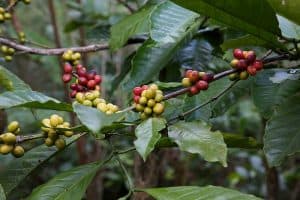 Coffea charrieriana (or Charrier coffee) is a species of flowering plant in the Rubiaceae family. It is a caffeine-free coffee found in Cameroon. This plant is the only known caffeine-free coffee plant from Central Africa. C. charrieriana was selected as one of “The Top 10 New Species” described in 2008 by The International Institute for Species Exploration at Arizona State University and an international committee of taxonomists.

As the only naturally caffeine free coffee, Coffea charrieriana presents a unique solution for coffee drinkers who are sensitive to caffeine, or who want to limit their caffeine intake for one reason or another.

Charrier coffee is particularly advantageous as a naturally caffeine free coffee compared to decaffeinated coffee, because it undergoes no processing in order to be caffeine free. The decaffeination process can often involve chemicals, which a deterrent for some decaf coffee drinkers.

Coffea charrieriana is still 100% coffee so it contains the other health components contained in coffee such as antioxidants. This makes charrier coffee superior to coffee alternatives such as roasted chicory root, which is sometimes drunk as a coffee equivalent due to the fact that it reacts very similarly to coffee when it is brewed and therefore looks and tastes like coffee but contains none of the health properties associated with it.