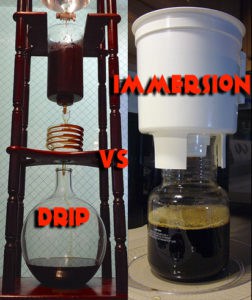 Cold brew is a coffee preparation technique where coffee is extracted using cold water or at room temperature. Cold brew coffee is not the same as iced coffee, which refers to coffee that is brewed hot and then chilled by pouring over or adding ice.

Preparing cold brew coffee is typically inexpensive, though exceptions exist. The cheapest cold brew coffee maker is a simple food recipient, where coffee is steeped for 12 or more hours. Commercially available cold brew makers are designed to brew large quantities, in order to compensate for the brewing time.

What Is Cold Brew Coffee? 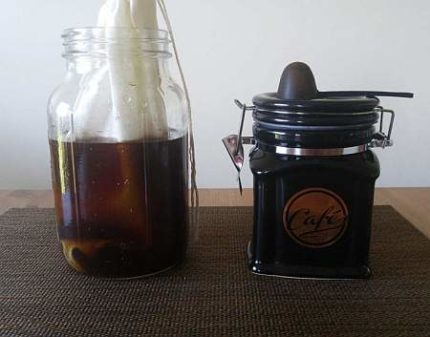 Cold brew has a different chemical composition than coffee prepared with hot water. Many of the compounds in the coffee bean are not soluble in cold water. On the other hand, some of the compounds are highly volatile, hence they get destroyed by the hot water.

The different composition will be reflected in a few ways, the most important ones are the aroma and taste and the capacity to stimulate stomach acid production. We have more about this, later in the article…

Pressure is another way to speed up the brewing. Although pressure only affects the rate of dissolution of gases, it still helps the brewing process by increasing the molecular agitation. Another aspect of brewing under pressure is the emulsification of the oils in coffee. Pressure brewing increases the amount of extracted oils, and permits to lower the brewing temperature. A lower beverage temperature preserves the aromatic oils longer in the cup. Espresso is the best example.

With traditional hot brewed coffee, hot water dissolves the soluble solids and the aromatic oils. Oils in coffee are released at just below boiling point, at around 96°C. If the coffee is overheated or allowed to boil, different compounds are released which cause a bitter taste. This is called over-extraction. If the extraction temperature is too low, some of the oils specific to hot brew are not released. Low-temperature brewing combined with a short time extraction results in an under-extracted beverage. The ratio between water temperature and brewing time will determine the extraction yield and the strength of the coffee. The hot water improves the rate of dissolution of the extracted compounds in coffee. It also improves the oil extraction by reducing the oil’s viscosity.

Cold brewing extraction is made at very low temperatures, and this raises specific problems. One of the problems is the long time to complete the extraction. Since we are relying on dispersion and diffusion to extract, brewing can take up to 72 hours, depending on the grind size and personal preference. Although the process is similar, cold water cannot extract the aromatic oils. On the other hand, the highly volatile compounds, that are usually lost during hot brew, are preserved with cold water preparations. This is why coffee lovers with great palate love this preparation method.

In order to speed up the process, coffee lovers have employed different techniques to increase agitation, (entropy), or increase the surface area. See the extraction methods for more info.

The brewing temperature includes three types of preparation: ambient temperature brewing, cold/refrigerated conditions, and hot bloom. Most of the cold brew coffee makers on the market use the immersion for brewing because is the least expensive.

Immersion cold brew is the more popular term but is also known as cold brew steeping. The method consists of immersing the coffee grounds in chilled or room temperature water for a period of twelve to twenty-four hours. Some recipes recommend steeping 72 hours.

Steeping cold brew relies on dispersion and diffusion for extracting the soluble solids from coffee. Since the dispersion process is very slow, the time for completing the extraction is very long. Because of the slow brewing process, it is common to brew a coffee concentrate, also called coffee syrup. The concentrate is usually diluted with water, or used in recipes. 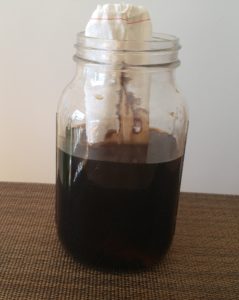 Following the steeping, the grounds are filtered out by using a filter. Most common ways to filter immersion coffee are:

After filtering, coffee is served or stored in the fridge.

Immersion cold drip devices are inexpensive. Commercial devices can brew up to 7 cups of coffee at once. Cold brew filters can be easily improvised, and a few options are:

Cold drip is a coffee making method, in which iced water is dripped through ground coffee. It is also known as Dutch coffee, or Kyoto style cold brew. With Dutch coffee, the water washes soluble matter from the coffee and then is passed through a filter into a collecting vessel.

Cold drip relies on diffusion and gravitation to extract the soluble solids. Gravitation speeds up the brewing time, (by increasing the entropy). Because of the increased entropy, batches brewed in 3.5 hours are very common. The brewing is faster, that is why many people choose to brew it at the drinking concentration. This improves the ratio of coffee grounds per brewed coffee cup, reducing cost.

There are various filtering options, with cold drip devices; the most common are paper and ceramic filters.

Pressurized cold brew uses pressure to improve/speed up the extraction time. The brewing time is a minimum of 2 hours, and the brewing device is improvised from a whipping siphon with N2O cartridges. The method uses a whipping siphon for brewing. Ground coffee and water are mixed in the siphon, let it steep in the fridge for two hours, and then strained. James Hoffman presented his pressurized cold brew tests on his blog.

While pressure in the espresso method increases the entropy, in the whipping siphon method it doesn’t, because the pressure is applied statically. A high pressure decreases entropy. By applying pressure we speed up the saturation of the grounds and increase the surface area. The entropy is slightly increased because of the gas bubbles’ action in the siphon. The effect of the gas bubbles, however, is minimal. James Hoffman’s experiment suggests that simply applying pressure during brewing is not very effective. In his experiments, a complete extraction needed 2 hours.

Emulsion cold brew uses agitation to extract solid compounds from the grounds. There is no commercial brewer for this type of extraction; the brewing is solely done by enthusiasts using improvised equipment. The emulsification process is just a secondary result. Emulsion cold brew has a lighter color due to the emulsification, and the texture of the drink reminds of micro-foaming.

The extraction is obtained by agitating water and coffee at high speeds to decrease dissolution time. As a secondary effect, the high speeds will emulsify the coffee fats in the water. The result is a light colored cold brew coffee. There are various methods of obtaining emulsified coffee: immersion blender cold brew, regular blender, ultrasonic generators, and other devices capable of agitating the water molecules.

Emulsion cold brew can be done in minutes, depending on grind size and the amount of entropy.

Vacuum cold brew uses suction power to speed up the extraction time. There is only one vacuum cold brew maker, and it is still in development. The coffee maker is called Prisma and it is scheduled to be released in May 2017. Prisma cold brew project is closed now on Indiegogo.

An improvised method involves the use of a chamber vacuum machine to make cold brew. Christine Seah from Dapper Coffee in Singapore did an interesting experiment with vacuum cold brew here. The vacuum forces the air out of the coffee grounds and forces the water in. The saturation is done almost instantaneously. The vacuum lowers the water’s boiling point, so coffee will literally boil at room temperature. Boiling increases the entropy of the system. The low heat boiling will preserve the delicate coffee flavors in, with a full extraction. Coffee is vacuumed for 35 to 60 seconds depending on the desired strength. After normal pressure is reestablished, coffee is strained and served.

Cold brew has distinctive flavor and aroma, different than hot brewed coffee. The flavors are more subtle in cold brew, while hot brews are bolder. Many iced coffee lovers seek for the boldness of a hot coffee in their cold caffeinated beverage. This lead to alternate ways to brew in order to extract the bright, vibrant flavors associated with hot brew.

The main problem with hot coffee is oxidation. The minute coffee is brewed it starts to oxidize. The high temperature accelerates the oxidation. In order to stop the oxidation baristas brew hot then cool down immediately. Japanese Iced Coffee and Hot Bloom Cold Brew are two pseudo-cold brew methods. 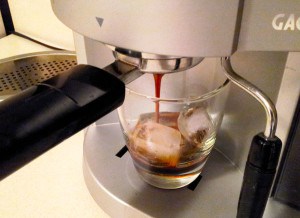 This method is advocated by Peter Giuliano in his blog. The method consists of brewing hot and drip the beverage directly on ice cubes, in order to cool down the coffee immediately. Coffee lovers brought the method a step further and improvised cooling systems for the carafe in order to avoid diluting the beverage. The method can be used with drip coffee, or with espresso.

Hot bloom was promoted by Lorenzo Perkins in 2012 and was inspired by Peter Giuliano’s work to popularize Japanese iced coffee. Perkins promoted a method in which the preparation starts with an initial hot bloom, between 45 to 120 seconds. After 45 seconds we continue with cold brewing for 12 hours. The hot bloom allows the extraction of some compounds and oils only soluble at higher temperatures. Iced water is immediately added over the grounds, to stop the oxidation and lock in the volatile compounds. The mix is then steeped for an additional 12 hours for a cold brew extraction. Lorenzo Perkins admits in his blog post that this “is cold brew, but at the same time, it is not”.

For people with a preexisting stomach condition, coffee can irritate the stomach and cause abdominal pain. Anecdotal evidence suggests that cold brew coffee is less irritating to the stomach than hot brewed coffee. There is not enough scientific evidence to support this popular belief, but there is an increasing number of people who experienced relief.

Overall, there are health advantages and disadvantages of using both brewing methods, although scientific research is lacking. The benefits of drinking coffee, in general, outweigh the risks; more info on our page on the subject.

There is an increasing concern that slow brewing at low temperatures raises the risk of bacterial growth. This translates into a higher risk of food poisoning.

The main disadvantage of cold brew is the long brewing time. This brings additional inconveniences.

With certain roasts, the smoke taste is easier to be transferred into the beverage, because of the long time brewing.