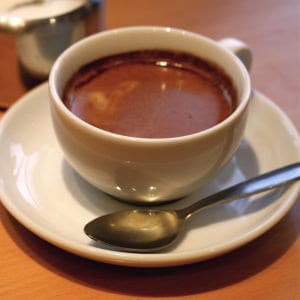 A doppio has approximately 2 oz. (60 ml), of beverage, the double of the solo, (the standard espresso volume). The 2 oz. is the standard extraction for a normale. We can also extract a doppio ristretto or a doppio lungo, and the volume will modify accordingly. Coffee machine settings and coffee grinder settings need to be adjusted to a new recipe when using a double filter basket to brew double ristretto or double lungo shots in order to achieve a successful extraction with these beverages.

The doppio espresso shot has become the standard shot in many parts of the world such as in the United States and the United Kingdom. This is because coffee is being drunk in these cultures in greater quantities and there is more of a demand for more highly caffeinated beverages. The net result is that all small sized espresso based drinks are prepared using a doppio shot. In more traditional coffee cultures, such as in continental Europe and in Budapest, a solo shot is still the normale espresso serving.