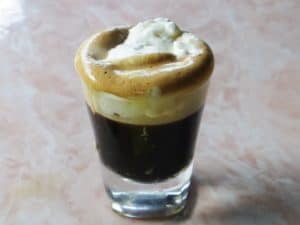 Espresso con panna means “espresso with cream” in Italian. As the name suggests, the beverage consists of a single or double shot of espresso topped with whipped cream.

Some other common variations of this name would be the café Vienne (used in the United States),  café Viennois (used in France and the United Kingdom) and the Franziskaner in Vienna.

In contrast to the espresso con panna, a Wiener Melange tends to be an espresso beverage topped with steamed milk, not whipped cream.

The espresso con panna is traditionally served in a 2 oz demitasse.

The whipped cream can be either sweetened or unsweetened and was traditionally added to espresso to enhance the natural, caramel sweetness from an espresso. More recently, it has been used to sweeten coffee that is poorly extracted and bitter.

The espresso con panna is commonly drunk as a mid morning pick me up, with the combination of sugar and caffeine giving the drinker a boost of energy.

The espresso con panna is an older beverage, the creation of which dates back to before the cappuccino or the latte. These days, it has largely fallen out of popularity in the world but is still a staple in some of the world’s more ancient coffee cultures, such as in the coffee houses in Budapest and Vienna.