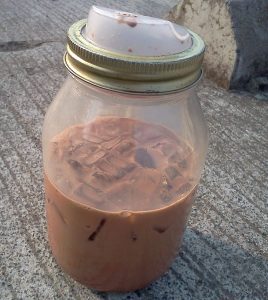 The iced mocha is a variant of the iced latte and another beverage that would fall into the bracket of iced coffee.

As with hot lattes and hot mochas, the iced mocha differs to the iced latte in that chocolate is added to the former to make it a mocha. This chocolate would typically be in the form of cocoa powder but any variant of chocolate such as chocolate sauce or melted chocolate can be used.

As a sweet, dessert beverage, iced mocha would often be served with whipped cream on top, as is the case with the Starbucks iced mocha which is a popular iced mocha choice in the market. Other optional flavorings, sweeteners and syrups can also be used.

In a similar way to the regular mocha, white chocolate or dark chocolate can also replace regular chocolate, creating a white iced mocha and a dark iced mocha respectively.

The word mocha comes from the city of the same name in Yemen which was a centre of early coffee cultivation and culture.

The iced mocha, along with other chilled coffee dessert beverages such as the frappé and the frappuccino is popular among young people and those who don’t enjoy the taste of coffee but still want to consume caffeine for its effects or for social reasons.