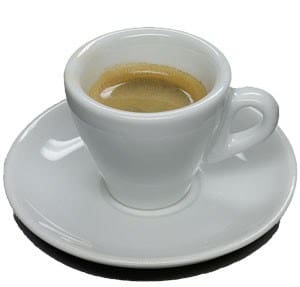 Normale, in the context of espresso, is the standard way of extracting a shot. A single shot normale is obtained by extracting approximately 1 oz of coffee, using 7 grams of ground coffee. A single is often named solo, using the Italian word for it. A normale is the standard espresso concentration, whereas ristretto is a concentrated version, and lungo is the diluted version of it.

An espresso normale can be pulled into a doppio, (a double shot), or a triplo, (triple shot), by using different size filter baskets.

An espresso normale is served in a 2 oz demitasse. A doppio will either be served in a standard small coffee cup or else in a cup specifically designed for double shots of espresso, which are less common.

An espresso normale extraction time is between 20 and 30 seconds, if the espresso recipe is balanced and correct. The recipe consists of grind size, dose (amount of ground coffee in the portafilter), water volume and temperature.

Grind size for an espresso normale should be fine, but not as fine as Turkish coffee, which has the consistency of fine powder.

The espresso normale, whether in single or double shot form, is the basis for all standard espresso based drinks that are popular in coffee culture and served in coffee shops. Common examples of drinks which have the espresso normale as a base are the cappuccino, caffèlatte, caffè mocha and  espresso macchiato.