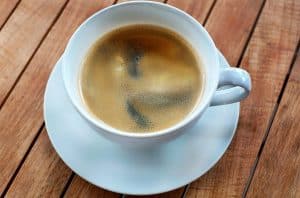 In coffee terms a red eye refers to a coffee beverage that consists of a regular cup of drip filter coffee with an espresso shot added to it.

This coffee is named the red eye because of the extra caffeine content in the beverage that is needed for those who are take early morning flights referred to as red eye flights, very often from the east coast to the west coast of the United States.

Irrespective of travel, the red eye has become a popular drink in general for its extra caffeine kick.

Humans become accustomed to caffeine intake and after a time don’t feel the effects associated with caffeine. Therefore, it has become very popular for more highly caffeinated drinks to be consumed such as caffeine energy drinks and the red eye coffee.

The red eye coffee became popular before double shots of espresso became the standard espresso serving in the United States. A filter coffee with a double shot of espresso is known as a black eye.

The red eye coffee isn’t normally served in coffee shops, nor is it an official part of coffee culture. It is more of a sub coffee culture that is consumed by busy people, students and workaholics or simply those that enjoy drinking high amounts of caffeine.