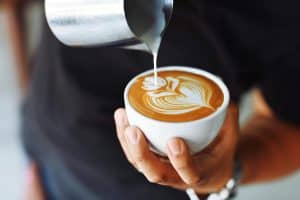 Although steam is generally too hot for brewing coffee, the power of steam is used in certain coffee brewing methods to create pressure. Pressure, in turn, improves the extraction.

Steam is the technical term for water vapor, the gaseous phase of water, which is formed when water boils. Water vapor cannot be seen, though in common language it is often used to refer to the visible mist of water droplets formed as this water vapor condenses in the presence of cooler air. Strictly speaking, in terms of the chemistry and physics, true steam is invisible.

Two examples of brewing methods that use pressure are Moka pot, and steam espresso machines.

Disambiguation: In general, steaming is a method of cooking using steam. Steaming is considered a healthy cooking technique and capable of cooking almost all kinds of food. This article focuses on steaming milk, a common operation for preparing coffee beverages.

In coffee preparation, steaming is used to inject milk with air bubbles, and heat it up.

Steaming gives the milk a frothy texture which is very appreciated by coffee lovers, and is used for the preparation of milk and espresso based beverages, such as latte, cappuccino, flat white, and mocha.

When steaming milk, depending on the technique and the equipment used, we can obtain steamed milk or frothed milk.

The main difference between steamed and frothed milk is the texture and the volume. Steamed milk denser than frothed milk, although it will have a bit of foam on top.

Steamed milk is produced by heating the milk with the steam wand. The main idea behind steaming milk is to bring it to a temperature around 150°F – 155°F. At this temperature

To steam milk, you need to place the tip of the steam wand just under the surface, positioning it in such a way that creates vortex, causing the milk to spin in the pitcher. This will result in the milk being heated evenly. Using a frothing thermometer, you will be able to tell when your milk has reached the ideal temperature so that you know when to stop steaming. Steamed milk is the cornerstone of the traditional latte.

Frothed milk is produced not only by heating the milk with the steam wand but by using it to inject air into the milk, creating small bubbles that will become the foam on your cappuccino. To froth milk, you should also place the tip of your steam wand just above the surface of your milk. However, you will need to continually lower your frothing pitcher as the milk expands in volume. As with steaming the milk, you will want to position the wand so that it creates a vortex in the milk. A traditional cappuccino is made with the ratio of 1/3 espresso – 1/3 steamed milk – and 1/3 frothed milk.

In order to understand why the milk steaming temperature is important, let’s see what happens when we steam milk.

Milk is composed of three main components: of proteins, carbohydrates, and fat.

Heat can coagulate milk proteins and this gives cooked milk a distinct flavor. When steaming milk, the injected air bubbles are held in place by the proteins. It is the proteins that prevent the bubbles from bursting and thus leading to the formation of foam.

The sugars in milk, (lactose), start changing the taste at higher temperatures, hence the sweetness is lost. This is what baristas call burning the milk. This is why it is recommended to use cold milk when steaming. The lower temperature gives the barista the opportunity to inject more air in the milk.