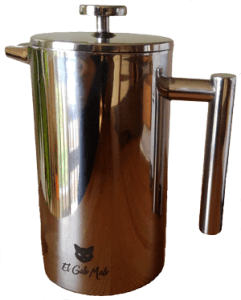 What Is a French Press? 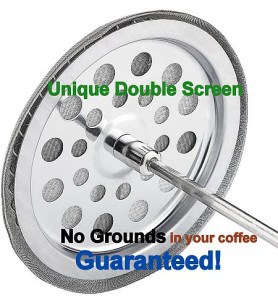 French press can also refer to the coffee preparation method. The French press coffee brewing method consists of immersing coarsely ground coffee in hot water, stir vigorously, and steep for 2 to 5 minutes. After steeping, the filter plunger is pressed down in order to separate the grounds from the brewed coffee. The stirring helps the grounds saturate with water for an improved extraction. The grounds are fully saturated with water when they sink at the bottom of the brewing recipient.

The simple coffee maker brews a surprisingly great coffee, which makes it the preferred brewing device of many coffee lovers. Despite the simplicity of the device, the press pot is very versatile, allowing the barista to create unique coffee beverages by modifying the brewing factors.

Design and history of the French Press

Since its first design, the popular French press has undergone a number of design changes. The first design of the press, said to have been made in France, was a rudimentary form of the modern version. In 1929, it was patented by the Italian designer Attilio Calimani. Since then, it has undergone a number of design changes by Faliero Bondanini. He patented his own version of the French press in 1958. After patenting the design, he began its manufacture in a French clarinet factory (known as Martin SA) where the press gained its popularity. Household Articles Ltd., a British company, was responsible for the presses’ popularity across Europe.

The modern-day French press consists up of a narrow cylindrical beaker, made from glass or metal. It is equipped with a plastic or metal lid and plunger that fits tightly in the brewing cylinder and has a fine nylon or metal mesh filter. Variations of more or less aesthetic designs are the result of its likelihood for attractive after-dinner presentation and simplicity of its mechanism.

French presses are self-contained and portable more than any other coffee brewers / makers. Travel mug, versions of the French press are made of heavy-duty plastic, instead of the glass. They also have a sealed lid with a drinking, closeable hole.

Some variations are designed and marketed with backpackers and hikers in mind, and they are light and compact. These are the perfect replacement for the regular drip coffee machine, or percolator when going for a hike.

Other variations, made of stainless steel, are designed to keep coffee hot, in a similar fashion to a thermos flask.

There is one particular design to use pulling, instead of pressing for separating the grounds from the brew. The coffee grounds in this case are placed in a mesh basket, and the plungers is pulled into the lid, once the brewing time is done. I  tried recently to find that product, but it looks like nobody sells it anymore. But you can French pull brew with a regular press.

A French press can also be used to make tea the same way you use it to make coffee. You can use it in the place of a tea infuser, when you want to brew loose tea.

Another use is frothing milk. The milk is frothed by moving the plunger up and down into the beaker until the milk gets texturized.