Turkish coffee is a method of preparing coffee. This coffee brewing method is found in the Middle East, North Africa, the Caucasus, and the Balkans. Although the method is named the same, the recipe has slight variations that modify the grind size, the extraction time, temperature, and the concentration. 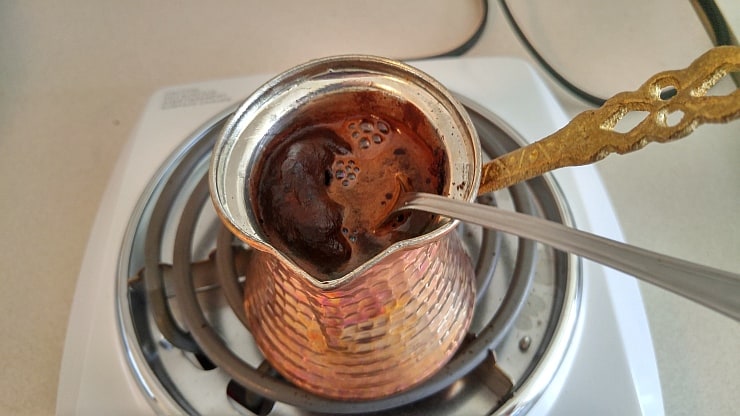 Roasted and then very finely ground coffee beans are boiled in a pot, usually with sugar. Turkish coffee is different from most other preparation methods because grounds are not filtered from the beverage. After brewing coffee is immediately poured in cups, and the grounds are allowed to settle. When the coffee temperature drops enough to be good for drinking, the grounds will be settled at the bottom of the cup.

The coffee is ground very fine almost to a powder. The very fine grind has two roles, it helps the grounds to settle after brewing and it speeds up the extraction. The ground coffee is exposed to high heat for only a limited time. This helps avoiding over-extraction.

Coffee is prepared in the traditional cezve, which is called in many countries outside of Turkey ibrik. Water is usually sweetened and brought to almost a boil. The powdered coffee is the added and carefully mixed with a spoon. As soon as the mixture begins to froth it is taken of the heat in order to avoid boiling it over. Coffee is the poured into cups so that all cups get froth. Optionally, froth is poured into cups and the coffee is reheated one more time to get more froth. A froth is a sign of of a well prepared Turkish coffee.

Traditionally, the cezve is set on hot sand which helps with a slower and more uniform heat transfer. This helps to maintain the optimal  brewing temperature for a longer time.

Though traditionally Turkish coffee is sweetened, many drink it black. There is a Turkish saying that coffee should be: “Black as Hell, Strong as Death, Sweet as Love”.