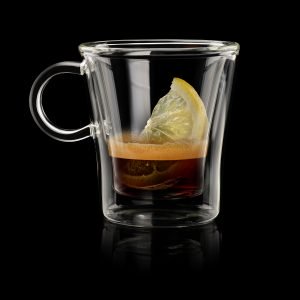 The café Romano is an espresso beverage with a squeeze of lemon juice added that is served with a lemon wedge.

Although the name suggests the café Romano comes from Rome or even Romania, it is in fact of American or Italian American origin. During the 1950s in the United States, bartenders and baristas started garnishing espresso with a lemon wedge, most likely imitating cocktail preparation where a lemon wedge is a popular garnish.

This practice was likely developed to counteract the taste of poorly extracted coffee. In the United States during this time there was a huge demand for Italian style coffee. This mass production of coffee in the United States led to coffee quality being very poor and generally badly extracted.

The café Romano is an unknown beverage in Italy and would not be served in an Italian coffee shop.

These days, the espresso Romano is not a very popular drink and would very seldom be drunk.

Common concerns with the café Romano generally rise from those who have sensitive stomachs or suffer from acid reflux (GERD). This is because coffee has an acidic effect in the body and the addition of lemon is thought to trigger acidity and acid reflux symptoms further. However, this is purely anecdotal and there is no scientific evidence to suggest that acid reflux is made worse by the consumption of either coffee or lemon.