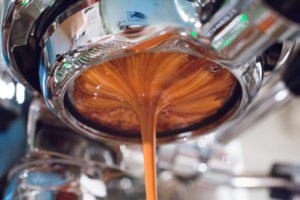 Espresso has a thicker consistency than coffee prepared by other brewing methods. It has a higher concentration of suspended and dissolved solids and crema.

Espresso originates in Italy and the invention of the first espresso machine is attributed to Angelo Moriondo from Turin, Italy, according to Smithsonian. Moriondo was granted a patent in 1884 for the “instantaneous confection of coffee beverage”. The Italian word espresso means fast. This initial innovation was somewhat lost until 1903 when Luigi Bezzera made a few improvements to the original and invented the single shot machine that brews directly into the cup.

Espresso was initially called crema caffè, due to the top layer of crema. The term was eventually replaced with espresso. An espresso variant is still called café crema.

What Coffee Beans Are Used for Espresso? What Roast?

Contrary to a popular belief, espresso is not a specific bean or roast. Although a dark roast facilitates the extraction of coffee oils, coffee experts can modify the extraction variables in such a way that lighter roasts can be used with the same success.

Having said that, certain blends or single origin beans can be more forgiving to the beginner barista. These can yield a high amount of crema, and provide a good taste profile, despite brewing errors.

Espresso is used for preparing most coffee-based drinks including macchiato, latte, cappuccino, mocha, and flat white. The reason is the strong flavor and aroma specific to this coffee. Although some use stronger drip coffee as an alternative, the taste is different, and any knowledgeable coffee lover will spot the difference.

Espresso can be prepared in various sizes and concentrations. A shot can be pulled in three major concentration variants: normale, ristretto, and lungo. The three variants differ by the amount of water used to extract a given coffee quantity and the extraction time.

A shot can be also pulled in various sizes, the most common being double espresso, (doppio). Other variants include single shot, (solo), and triple shot, (triplo). 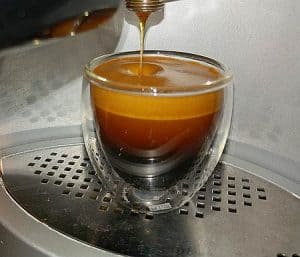 The definition of espresso says it is obtained by pushing hot water through a puck of finely ground coffee. This means devices such as the moka pot, steam espresso machines, can be classified as espresso coffee makers. And indeed many coffee lovers treat them as such. The reality, however, reveals that the taste and aroma of a shot pulled with a pump operated espresso machine are very different from other methods. This is because pulling an espresso shot needs a lower water temperature and 9 bar pressure.

There is a spread misconception that any strong coffee qualifies as espresso. Espresso Is NOT Just a Strong Coffee. In order to qualify as espresso, as we know the modern day coffee drink, coffee need to be prepared using 9 bars of pressure.

Espresso alternatives include Moka pot, and the AeroPress, which both use pressure for the coffee extraction, but the pressure is around 1 bar only.

There is a common belief that espresso has more caffeine than drip coffee. This is true if we measure the caffeine content per unit volume. A shot of espresso, has 1 oz volume, about 30 ml, and contains 47 to 64 mg of caffeine. A drip coffee in North America has a standard volume of about 8 oz and contains 95 to 165 mg of caffeine. Most espresso drinkers will buy a doppio, rather than a solo though. With a double espresso, the total caffeine quantity is between 90 and 130 mg.

Espresso is different from drip coffee in a few ways. The use of pressure during brewing, changes the way soluble solids and oils are extracted from the coffee beans.

During espresso extraction, aromatic oils in coffee are emulsified into water, and the soluble solids are extracted very fast.

During drip brewing, or other gravitation, or immersion brewing methods, the extraction is much slower, and there is no pressure. This can result in more bitter compounds being extracted into the final cup. Without pressure, less oils will be extracted from the beans, and the extracted oils will not be emulsified, thus there will be no crema.