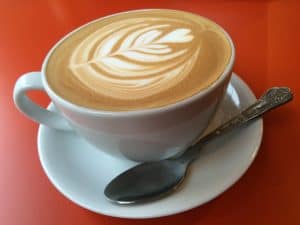 Caffè Latte is a drink commonly prepared with one third espresso and two thirds steamed milk. The name is a portmanteau of the Italian words Caffè, which means coffee, and Latte, which means milk.

Internationally, the name is commonly shortened to simply latte. As this is just the name for milk in Italian, if somebody orders a “latte” in Italy, they will simply receive a glass of milk.

Originally, the name Caffè Latte just referred to a milk based coffee in Italy. This would be similar to the café con leche in Spain, the café au lait in northern Europe, the milchkaffee in Germany and the cafè creme in France. These milk based coffees are larger drinks, served typically in an 8 oz cup, as opposed to shorter milk based drinks such as the cortado, piccolo or espresso macchiato, which are served in a 2 oz demitasse.

Although the name Caffè Latte is Italian, the drink is actually not a strong part of the Italian coffee culture and to this day is not normally served in Italian coffee shops. Rather, it is a drink that is brewed at home. The coffee is brewed using a moka pot and the milk is simply heated over a stove, not steamed. In coffee shops in Italy, they offer cappuccino as the longer milk based coffee option.

Internationally, a caffè latte is generally accepted to be a shot of espresso or ristretto with steamed milk and a layer of foam about half an inch thick on top, served in an 8 oz cup as a standard size. In the United States, a latte would generally be sweetened with sugar.