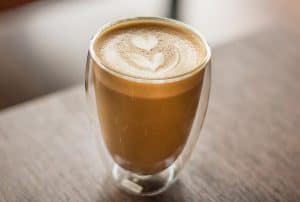 Caffè Mocha is a variation of the caffè latte, which is similarly prepared with espresso coffee and steamed milk but has the addition of chocolate, normally in the form of cocoa powder. The classic mocha is then topped with cappuccino foam which amounts to 0.75 of an inch of foam.

Variations on the classic mocha include making the beverage with dark or white chocolate or making the drink with chocolate syrup. Cinnamon, nutmeg or other flavors are often additionally added and the mocha is commonly seen topped with whipped cream.

The name mocha is derived from the city of Mocha in Yemen, one of the earliest known centers of coffee trade. Variations of the name are Mochachino, mochaccino and mocaccino.

Due to the addition of chocolate, mocha is a very sweet beverage and is often consumed as a dessert, similar to the affogato.

Mocha is also a popular drink among those who want to drink coffee and experience the effects of caffeine but don’t like the taste of coffee, as the chocolate and other flavorings overpower the coffee taste.

In France, the caffè mocha is referred to as the mocha latte.