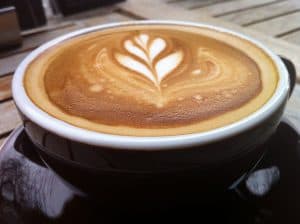 The flat white is a milk based espresso drink that is comparable to the latte. It is typically served in a smaller cup than a latte and is prepared using a double shot of espresso. Therefore the beverage is more concentrated.

The flat white would nearly always be served with latte art and is a very popular drink in the third wave coffee movement. The steamed milk consistency should be a velvety micro foam similar to a latte and not as thick as a cappuccino, with the foam layer at the top only being roughly 1 millimetre deep.

The flat white most likely originated in Australia in the 1980s. However, this fact has been contested, and there are claims that the beverage was also created in New Zealand. The popularity of this drink was mainly contained to these two countries throughout the 1990s before being brought over to other coffee drinking cultures.

Nowadays, the flat white is the most popular coffee order in many other English speaking coffee cultures such as in Britain, Ireland and the United States.

Other non English speaking European coffee cultures have held on to their their previously existing, staple milk based espresso drinks such as the café au lait in northern Europe, milchkaffee in Germany, café con leche in Spain and cappuccino in Italy.