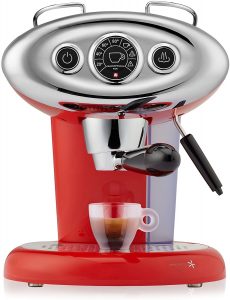 FrancisFrancis! is an espresso machine manufacturer owned by illy. Founded in 1994 by Francesco Illy, FrancisFrancis produces espresso machines for the home market. Italian architect Luca Trazzi was responsible for the aesthetics. In 2004 the company was purchased by illy. Since then, FrancisFrancis! have become the espresso machines of choice for illy; always associated with the coffee brand. Various FrancisFrancis! machines are designed by other award-winning designers and are considered a piece of industrial art on their own. The Francis Francis! espresso makers were some of the first to feature the option of E.S.E. pods. Later on, illy introduced the iperEspresso system which produces one of the best capsule based espresso beverages.

illy iperEspresso is a patented capsule system for preparing espresso coffee and espresso-based drinks. iperEspresso has a two-stage extraction process. The first stage is the pre-infusion when coffee is uniformly saturated with water. The second stage is the extraction and emulsification when water is forced through the capsule. The capsule has a valve that ensures the optimal pressure during extraction. illy iperEspresso is found on many Francis Francis espresso machines, as well as machines made by  Gaggia, and Cuisinart.