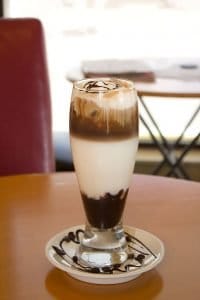 An iced latte typically refers to a beverage that is prepared with freshly brewed, hot espresso and chilled milk over ice. This drink is very typical in the United States.

An iced latte is not prepared using steamed, micro foamed milk, in comparison to a regular hot latte. Due to this lack of milk foaming, it is not possible to create the foam that is a signature for the cappuccino, which is probably the reason for no iced cappuccino beverage existing in coffee culture.

Variations of the iced latte can be made using cream or ice cream instead of or as well as milk, as well as various flavors being added. Some establishments also use filter coffee instead of espresso.

Iced lattes and iced coffee in general are also sometimes prepared with espresso that has been pre brewed and chilled to avoid heating up the drink at all. This step has been heavily criticized in coffee circles, especially in the third wave coffee scene, as hot coffee starts to spoil after it has been brewed and so a beverage with pre brewed espresso is going to taste off and bitter by default.

A popular alternative to iced lattes in specialty coffee circles is cold brew coffee. This differs from an iced latte in that the coffee is brewed at cold temperature, not hot, and over a longer period of time. This process makes the coffee much more stable and not prone to spoiling when it comes into contact with the air.