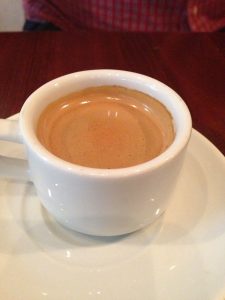 Cuban espresso can be prepared with an electric espresso machine or by using a moka pot. Sugar is mixed vigorously into the espresso as soon as it starts to brew, forming a foam or espuma. This action serves to hydrolyze the sucrose, which results in a beverage that is much sweeter compared to espresso that has sugar added after brewing.

As well as the standard espresso form, a Cuban coffee can also refer to any coffee that has sweetened espresso in this style; for example a café con leche or a cortado.

The Cuban espresso is a very popular drink among the Cuban American community in the United States, especially in east coast cities in the state of Florida such as Miami and Tampa. Although the drink originally comes from Cuba, it is not a drink commonly drunk in Cuba today.

A variation of the Cuban espresso is also drunk in India, known as the Indian espresso. For this beverage, a variation of instant coffee is commonly used. The instant coffee is beaten with sugar until it is rich and creamy. Cold or heated milk is then often added and the drink is garnished with cocoa powder. The Indian espresso has been compared to a cappuccino, although the preparation process is entirely different.