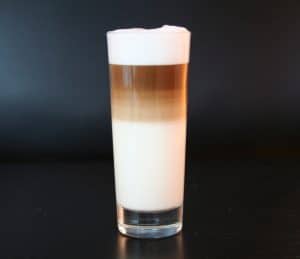 The latte macchiato is a coffee beverage that is similar to the caffè latte and is a longer version of the caffè macchiato, also known as the espresso macchiato. These three beverages are often confused for one another.

As with the espresso macchiato, the name is derived from the Italian word “macchiato”, which means stained.

A latte macchiato is also typically prepared with less espresso, often as little as half a shot, in order to create the steamed look and not to discolor the beverage too much. The late macchiato also generally has more foam than a latte, more similar to the volume in a cappuccino.

These days, a version of a macchiato drink is regularly served in the United States by coffee shops such as Starbucks. These coffees are made with with varying ingredients such as cream and caramel syrup which bear very little resemblance to the original macchiato beverages.