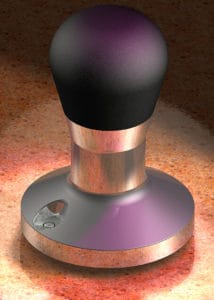 A tamper is a device used for compacting the coffee grounds when brewing espresso. The “tamping” operation is one of the most important steps in espresso brewing. During tamping, the coffee grounds are pressed in to the filter basket, compacting them into a puck. The coffee needs to be compacted in order to create enough pressure for a correct extraction during shot pulling.

The tamper has a flat side which is used to press onto the coffee grinds, and a handle. The flat side is made of metal, stainless steel and aluminium are most commonly used. The handle can be made from the same material as the tamping side, but many times it can be made of wood, or plastic.

Tamping correctly with a tamper is considered an essential aspect of barista technique. A tamper must be employed with even pressure across the coffee bed. This creates an even puck in the portafilter where space between coffee grounds is completely even. Incorrect use of a tamper will result in a coffee puck that is at an angle, with gaps or holes throughout. This causes water to channel which results in poorly extracted and bad tasting coffee.

Some espresso coffee makers come with a built in tamper on the machine. These built in tampers are not generally favored in coffee culture and baristas in commercial coffee shops will most often choose to use a handheld tamper for better control over angle and pressure.