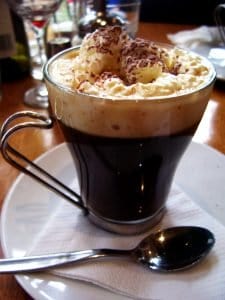 A Vienna coffee is a cream based espresso beverage. It is prepared by adding whipped cream to a double shot of espresso. The cream is then infused with the espresso until the cup is full. The whipped cream replaces milk and sugar in a standard cup of coffee, as the whipped cream is much sweeter than milk.

The Vienna was very popular in the 1970s in the United States but it was prepared with pouring cream. For this version of the Vienna, the pouring cream is poured gently over the back of a spoon and on to an espresso, creating a layered effect similar to the Irish coffee.

Cocoa is often added to the Vienna or else is used as a dusting on top.