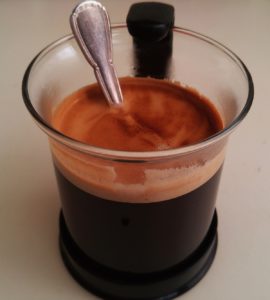 Triple, in the context of espresso brewing, refers to a triple shot of espresso, pulled from approximately 21 grams of coffee grounds. The triple is pulled using special filter baskets that can hold the necessary 21 grams of coffee. Triplo, as is also called with the Italian name, is not just simply a time and volume adjustment variant of the solo. The triple shot needs to be pulled in about the same time as a single. For this, the grind size needs to be adjusted accordingly.

A triplo espresso can be pulled into a normale, a lungo, or a ristretto. The difference will be the amount of water used, the grind size, and the extraction time.

Triple shots are not very popular in most coffee cultures as machine settings and grinder settings need to be adjusted every time a triplo is pulled. The triplo also requires a separate brewing basket which many coffee shops deem to be an unnecessary investment.

The triplo shot is seen more commonly in the United States, where coffee servings are typically much larger than elsewhere in the world. The term “quad” shot has even been coined in the States to describe a coffee beverage containing four shots of espresso. However, there is no quad shot portafilter and so a doppio filter would be used twice in this instance.