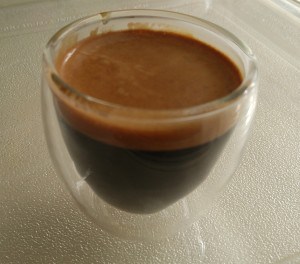 Single in the context of espresso brewing, refers to a single shot of espresso, pulled from approximately 7-8 grams of coffee grounds. Also called a solo, by the Italian name, a single shot normale espresso holds about 1 oz. of brewed coffee, and it is prepared using a single filter basket.

True solo shots are rare. Usually, single shots in a coffee shop are half of a doppio shot. This is especially true in areas of the world such as the United States and the United Kingdom where the standard espresso dose is a double shot. In more ancient coffee cultures such as in continental Europe, a single shot is the standard serving of coffee and espresso is more commonly prepared as a single shot using a single filter basket.

Coffee shops generally choose their standard espresso dose and stick to it in order to avoid having to reprogram coffee machines and coffee grinder settings whenever they switch between pulling single, double or triple shots of espresso.

The single espresso shot has traditionally been the base of all espresso based drinks such as cappuccino, Americano, caffè latte, caffè mocha and espresso macchiato. In more recent years, as the demand for bigger and more highly caffeinated beverages has increased, the double shot has largely replaced the single shot as the standard espresso amount in milk and water based espresso beverages.