Coffee grinding is a critical step in the process of brewing coffee. Without grinding, the extraction of soluble solids, caffeine, and oils would be impossible even at high brewing temperatures.
During grinding, the whole coffee beans are turned into small particles, the particle size varies depending a number of objective and subjective factors, among which the most important are: brewing method, recipe, and personal taste. The grinding, also known as milling, facilitates the extraction of soluble matter from the coffee bean, otherwise locked into the coffee bean. 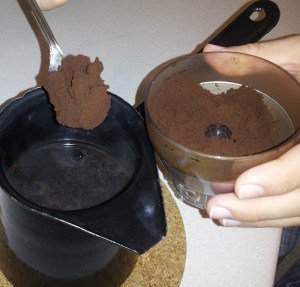 Coffee that is finely ground will expose more surface area to the heated water. The large surface area combined with a long brewing time and a high brewing temperature will lead to over-extraction and produce a bitter taste.

In theory, we can use less coffee if we grind it finer and we brew longer. In practice, the taste profile will be slightly different, although we can extract the same amount of caffeine this way. The coffee strength will be similar, but the flavor will differ.

Burr mills use two revolving abrasive elements, such as wheels or conical grinding elements, between which the coffee beans are crushed or “torn” with little frictional heating. The process of squeezing and crushing of the beans releases the coffee oils, which are then more easily extracted during the infusion process with hot water, making the coffee taste richer and smoother.

Both manually and electrically powered mills are available. These mills grind the coffee to a fairly uniform size determined by the distance between the two abrasive surfaces between which the coffee is ground; the uniform grind produces a more even extraction when brewed, without excessively fine particles that clog filters.

These mills offer a wide range of grind settings, making them suitable for grinding coffee for various brewing systems such as espresso, drip, percolators, French press, and others. Many burr grinders, including almost all domestic versions, are unable to achieve the extremely fine grind required for the preparation of Turkish coffee; traditional Turkish hand grinders are an exception.

Burr grinders are of two types – conical burrs and flat wheel burrs. Both of them grind coffee beans consistently and with uniform size. Almost every burr coffee grinder grinds at low noise, offers a large hopper for storing whole coffee beans, is easily used with a portafilter for espresso grind, has a body made of stainless steel or ceramic and has a modern design as well as a slow operating system to ensure a fine grind all the time.

Burr grinders are widely used for grinding coffee in both domestic and commercial settings. They have the advantage of providing a uniform grind size at a relatively low cost.

Coffee beans can be chopped by using blades rotating at high speed (20,000 to 30,000 rpm), either in a blade grinder designed specifically for coffee and spices, or in a general use home blender. Devices of this sort are cheaper than burr grinders, but the grind is not uniform and will produce particles of widely varying sizes, while ideally all particles should have the same size, appropriate for the method of brewing. Moreover, the particles get smaller and smaller during the grinding process, which makes it difficult to achieve a consistent grind from batch to batch.

Blade grinders create “coffee dust” that can clog up sieves in espresso machines and French press, and are best suited for drip coffee makers. They are not recommended for grinding coffee for use with pump espresso machines. Generally, the consensus is that the lack of uniformity is not desirable in any coffee brewing method. However, some brewing methods are more sensitive to grind size uniformity than others, with the best example being the French press.

Water-cooled roller grinders are used for high levels of production as well as for fine grinds such as Turkish and espresso.